A step back in time: the historic timeline of St Anne’s Catholic School, Sarina 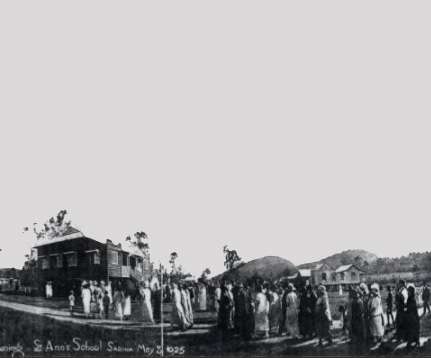 As we step back in time to the opening of St Anne’s Catholic Primary School, Sarina, in 1925, we share the historic timeline of how the school’s journey unfolded:

1923: Father Tom Hogan requested the Sisters of Mercy to form a community in Sarina.

1925: St Anne’s Catholic Primary School was founded by the Sisters of Mercy and officially blessed and opened on 23 May 1925 by Bishop Joseph Shiel with Sr M Laurence as the Foundation Principal.

In the intervening years, there has been much refurbishment and expansion of the facilities.

1980: The William Hoey Wing was constructed providing classrooms and an all-weather shelter underneath.

1995: A new library and administration block was built and the existing library was converted to the St Anne’s Preschool.

2000: St Anne’s reached a milestone in 2000 with the establishment of the inaugural school board. This body is responsible for the development of school policy and provides a vital link to all community members.

2005: St Anne’s celebrated their 80th anniversary in 2005. This was a community-wide event which saw many past principals, staff and students returning for this event.

2006: A new classroom was built in preparation for the expansion of the school.

2007: A new Prep facility was developed and the Year One classroom was refurbished.

Further photos and information about the school’s history can be found here.